This post is written by Jewett School of the Arts 8th grade student Jacob and is a reflection of his building a pool table in the Fabrication Lab.

A pool table. Definitely one of my hardest and most ambitious projects, but also one of my favorites. An idea that turned into a reality with the help of others and a lot of time to work. I enjoyed seeing the table’s journey to completion and I was always eager to work on it to eventually see it done. I could not have done it without the help of Mr. Dill who guided me through the process of what we needed to do and how to do it and the most important machine I used, the ShopBot, which helped machine many pieces of the table. My classmates who helped the most were Taj, who helped with the assembly and moving the pieces and Alayna, who helped with the assembly of the table. It still amazes me that it was essentially just a pile of plywood that turned into a pool table.

It started with the idea of a bigger project than a standard one, something that would be year-long. I don’t really remember how a pool table came up, just that the next day I started working on it by first going online and looking for the things we couldn’t make 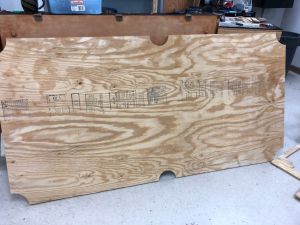 (the balls, bumpers, cups, and cue). After that I started designing the actual tabletop of the pool table, but it is where I found my first problem. The holes for the pockets on the table were too large and I had to recut it, but then I had to do it again after that because the second time the table was not fitting the outer frame. On the third try though, I made the top of the frame and table together so that they would fit together perfectly.

Next, I started working on the bottom of the outer frame by cutting out plywood and cutting the ends at an angle so the ends would form a miter joint and connecting the pieces all together with nails and wood glue to have the top of the frame connected to the bottom. I had to also layer another copy of the top of the frame to make it large enough to fit the height of the bumpers. I stained the outer frame, but it was uneven as wood glue dripped off the sides and made the stain look bad.

With the outer frame done, I had to work on the inner frame which proved to be very difficult. At each 1’ mark there was a slot for the pieces of wood to interlock, similar to the flat furniture idea. I connected them all together with wood glue and nails, but it was

The inner frame was propped up, then gravity pulled the outer frame onto the inner frame and they were connected using screws. A black paint job was given to the outer frame and I cut the bumpers at angles so they would be in line with the pockets. More contact cement was used to put another material over the bumpers to make them look better and I finally finished the table when I used staples attach the cups to the table.

All that was left was to create something for the table to sit on. It was originally on another table so we could play on it, but something more permanent and nicer was needed. I made four columns, each with a cutout for a cross beam (again like the flat furniture) and a square at the top and bottom leveling it. The horizontal cross beams were connected, then the vertical ones, and finally a piece was laid over them so it would create a smaller table underneath for the cue and ball storage. The underside of the inner frame of the table was leveled then another wood piece was attached under for the tops of the legs to rest on. When it was all done, the weight of the table kept it on the pedestal and it was very sturdy. 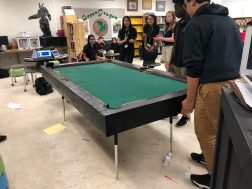 Six months of work went into a project that turned out amazingly. A pool table with a playing area of 3.5’x7’ and a table size of 4’x8’. If I were to redo it, I would design the side pockets so that they were more inward and the balls could ride past them easier. I would also try to not waste as much plywood as I did, but one of the failed tabletops was used for Madison’s backing of her throne so I guess it was not that much of a waste. It wasn’t just another project, but a useful learning experience and a teaching of skills that I will remember forever. I hope that the building of the pool table leaves an impression on what can be done in class and inspires others to try out their own ideas.

This is a text widget, which allows you to add text or HTML to your sidebar. You can use them to display text, links, images, HTML, or a combination of these. Edit them in the Widget section of the Customizer.
Loading Comments...
%d bloggers like this: